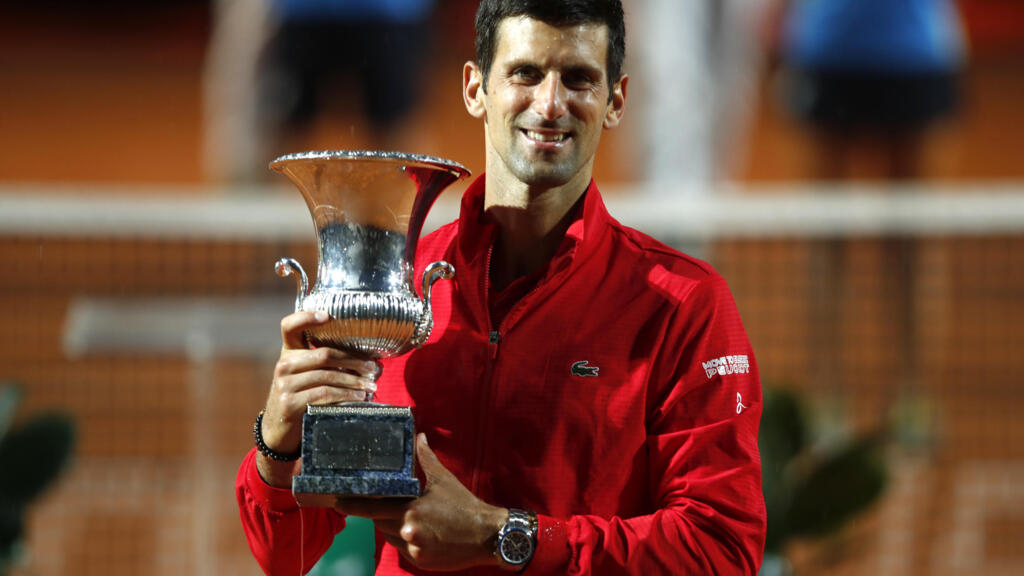 Novak Djokovic, world number 1, won the Masters 1000 in Rome for the fifth time, logically dominating Argentina’s Diego Schwartzman (7-5, 6-3) in the final, one week before the start of Roland Garros.

Two weeks after his disqualification from the US Open, the Serbian player thus obtains a 36th title in Masters 1000, a record, thus exceeding Rafael Nadal (35). And this less than a month after having already conquered that of Cincinnati, relocated to New York.

Simona Halep, another great favorite expected on Parisian clay, also prepared in the most beautiful way by winning for the first time in Rome, after two finals lost in 2017 and 2018. She took advantage of the abandonment in the second set, due to injury, of the defending champion, the Czech Karolina Pliskova.

Despite the absence of Nadal this year against him in the final, Djokovic was wary of Diego Schwartzman (15th player in the world), who fell to the Spaniard in the quarter-finals.

The Argentinian, after spending more than three hours on the court Sunday night for the semi-finals, however had fewer legs during this final disputed in light rain.

And despite a great start (3-0, taking twice the service of an annoyed and imprecise Djokovic), Schwartzman, for his first Masters 1000 final, could not do anything against the world number 1, certainly far from his best tennis, but still as effective in the decisive moments (7-5, 6-3).

“Even though I haven’t played my best tennis, I’m satisfied”, he said during the “Nole” awards ceremony. The player will have succeeded in his return to clay at the end of the hard season punctuated by the title in Cincinnati, but also his disqualification at the US Open, his only defeat in 2020.

For Roland Garros, the favorite remains Nadal, he judged at a press conference. Even though “Diego (Schwartzman) has shown that he can be beaten on clay” and that the conditions expected in Paris – humidity in particular – are not the Spaniard’s favorite.

Schwartzman, who has just met the two world leaders, refuses for the moment to designate a favorite for the Parisian Grand Slam: “Novak arrives in full confidence, but Rafa is the king, it is his house. It is really a Difficult question”.

Simona Halep, she sets course for Roland-Garros “without pressure, smiling”, but with a real label of favorite after her victory in Rome. She had already been crowned in Paris in 2018.

Karolina Pliskova couldn’t really defend her title due to a pain in her thigh. “It got worse day by day. This morning, I even wondered if I was going to play, but you still want to try,” said the Czech, who “hopes” to be recovered for Roland Garros.

Swept 6-0 in the first set, she seemed to recover in the second and had even just won her first game when she headed for Halep to signify the end of the match (6-0, 2-1).

A life in a “bubble”

After two finals lost in 2017 and 2018, Halep won for the first time on Roman clay and won his third consecutive tournament after Dubai and Prague, less than a week before Roland-Garros kick-off, exceptionally moved in fall due to coronavirus pandemic.

The Romanian signs in passing her 14th consecutive victory. This series had started before the interruption of competitions due to coronavirus with his title in Dubai in February and continued on resumption with its success in Prague in August and now in Rome.

“The tournament went well, and in these conditions it’s not easy. We felt really safe and really good on and off the courts, even though we stayed in our rooms a lot. with, because we love to play tournaments, ”she said.

Because of the coronavirus, players were required to stay at their hotel, when they were not at the stadium. A life under “bubble” that the return of the spectators since Sunday – within a limit of 1000 maximum – has a little animated, before finding even more spectators in Paris.

You can now stream your Xbox games for free on Android