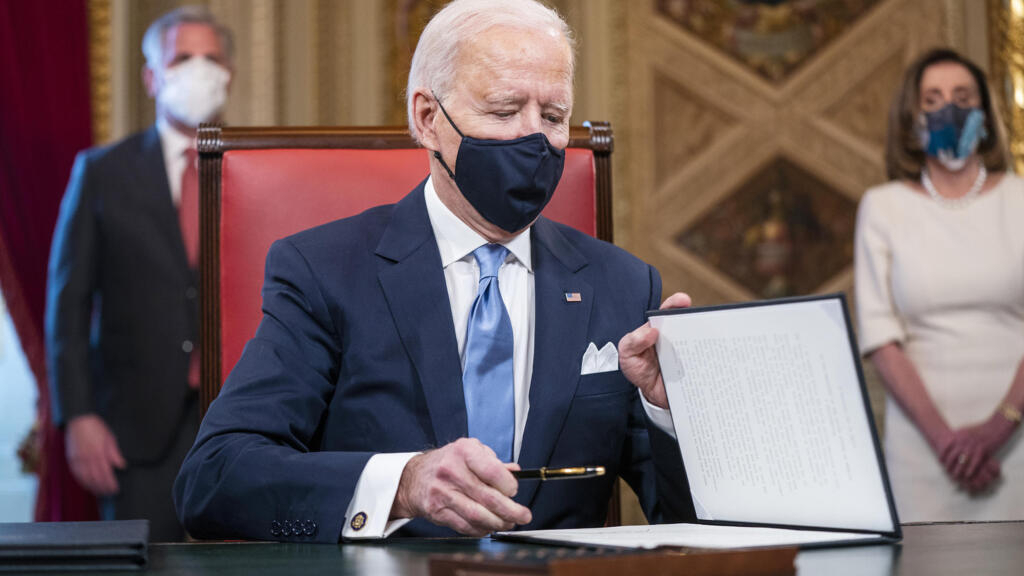 The swearing in of Joe Biden, who became the 46th President of the United States on Wednesday, sparked a series of international reactions. If the allies of the United States, such as the European Union, France or even Canada, have displayed their optimism, the rivals of the world’s leading power have shown themselves to be skeptical, like Iran and Russia.

Joe Biden’s arrival at the White House, after four years of Donald Trump’s controversial presidency, sparked a wave of optimism and relief on Wednesday January 20 among the traditional allies of the United States, who offered him a “new start”.

Washington’s main rivals preferred to show no illusions, with Russia judging that an improvement in relations would depend on the “political will” of the new president and Iran believing that “the ball is in the court” of Joe biden.

“A new start” for Europe

“The EU has a friend again in the White House after four long years” of the Trump presidency, she had previously said to the European Parliament.

For his part, the President of the European Council, Charles Michel, felt that it was “time to return to convictions, to common sense and to modernize our relationship”, after having launched “a call to build together a founding pact, new “.

“The start of a new chapter in the Transatlantic Alliance”

“I look forward to working closely with President Biden,” he added, stressing that “NATO allies must be united to face the security consequences of China’s rise, of the terrorist threat, including in Afghanistan and Iraq, and of a more assured Russia “.

“We are delighted that the United States as an indispensable partner will be by our side again in the future on many issues: in the common and united fight against the Covid-19 pandemic, the global protection of the climate, on security issues, “he detailed.

“American leadership is vital on issues that concern us all, from climate change to Covid, and I look forward to working with President Biden,” he wrote on Twitter.

Congratulations to @JoeBiden on being sworn in as President of the United States and to @KamalaHarris on her historic inauguration. America’s leadership is vital on the issues that matter to us all, from climate change to COVID, and I look forward to working with President Biden.

The congratulations of Emmanuel Macron

French President Emmanuel Macron sent his “best wishes for success” to the new US president and hailed his decision to return to the Paris Climate Agreement.

I welcome the return of the United States to the Paris Climate Agreement: Welcome back!

“A great day for democracy”, according to Giuseppe Conte

“Italy is ready to face with the United States the common challenges of the international agenda,” he wrote on Twitter.

Wishing good work to President @JoeBiden and Vice-President @KamalaHarris. This is a great day for democracy, reaching far beyond the American borders. Italy stands ready to face the challenges of our common international agenda together with the United States. #InaugurationDay

The wishes of Pope Francis

Pope Francis sent “his best wishes and assurance of prayers” to the second Catholic president in US history after John F. Kennedy, and encouraged him to promote “reconciliation and peace in the States -United and among the nations of the world “.

Canadian Prime Minister Justin Trudeau said he was “eager to work with President Biden” to “seek to make our countries safer, more prosperous and more resilient”.

Indian Prime Minister Narendra Modi sent his “warm congratulations” to Joe Biden. He said he “looked forward to working with him to strengthen the strategic partnership between India and the United States.”

“Strengthening the alliance” between Israel and the United States

Israeli Prime Minister Benjamin Netanyahu called on the new US president to “strengthen the alliance” between Israel and the United States in order to face “common challenges”, such as the “threat” from Iran.

The hope of an “independent” Palestine

The Palestinians, for their part, called on President Biden to work towards the creation of an “independent” Palestine.

“We look forward to working together for peace and stability in the region and in the world,” said Palestinian Authority President Mahmoud Abbas.

The Kremlin has ruled that improving relations between Russia and the United States depends on the “political will” of President-elect Joe Biden, according to a statement by Russian Presidency spokesman Dmitry Peskov.

Russian diplomacy has also said it hopes for “more constructive” work with the Biden administration to extend a major New Start disarmament treaty, limiting the nuclear arsenals of the two powers, which expires on February 5.

For his part, the last leader of the USSR, Mikhail Gorbachev, called for “a normalization of relations”, which are today “a source of great concern”.

Tehran hails the departure of the “tyrant” Donald trump, judging that “the ball is in the court” of the new American president, Joe Biden, for a possible return of Washington to the agreement on the Iranian nuclear power.

Donald Trump “has only brought problems to his own people and to the rest of the world,” Iranian President Hassan Rouhani added in this televised address.

the ski lifts will remain closed on February 1st in France

Covid-19: a funeral staged by journalists in Brazil?

Denmark suspends use of AstraZeneca vaccine as a precaution