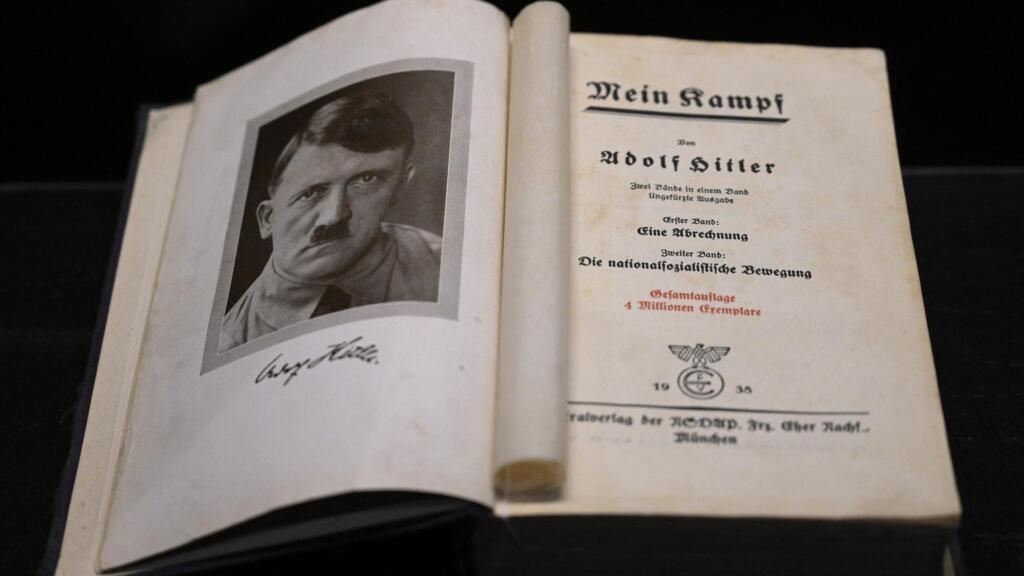 After ten years of scientific collaborations, the Fayard editions published on June 2 a critical version of “Mein Kampf”, an exposition of the racist and anti-Semitic ideology of Adolf Hitler. Defenders of the project intend to disarm a fantasized object, the publication of which has been repeatedly postponed due to the controversial nature of the work.

No artwork, no color, Hitler’s name doesn’t even appear on the white cover of this 1,000-page pad. Difficult to make publication more sober for the reissue of “Mein Kampf” that Fayard editions are about to be released on June 2. The work titled “Historiciser le mal, a critical edition of” Mein Kampf “” does not even use the original title as it is primarily a new translation of the text of ‘Adolf Hitler, augmented by a voluminous critical apparatus and scientific notes. “The notes and the criticisms which are affixed to the original text represent two thirds of the work, fruit of ten long years of research, it would therefore be wrong to speak of a simple translation”, explains to France 24 Hélène Miard-Delacroix, professor at Sorbonne University and specialist in German history.

“MEIN KAMPF”. “85,000 copies have already been sold. A surprising publishing success which divides the Germans. “
Fayard will publish a new edition of #MeinKampf June 2. The debate around this thorny critical reissue is not new, in France as elsewhere: pic.twitter.com/xIMXRq651c


Written by Hitler between 1924 and 1925, “Mein Kampf” is the manifesto which for the first time defines the contours of Nazism and will lead to World War II, which will kill between 50 and 70 million. Its author, who was then serving a prison sentence after a failed coup in Bavaria, exposed there through violent imprecations his ideology with racist and anti-Semitic overtones. The work is also an autobiographical book in which Adolf Hitler looks back on his journey.

>> To read: “Mein Kampf” falls into the public domain: “banning it would be counterproductive”

Conscious of the controversies that the publication of this Nazi firebrand may arouse, Fayard editions seem to have taken all measures to thwart any accusations of an editorial coup. Thus, the book will not be distributed on the shelves of bookstores but available only on order. The price of the book, sold for 100 euros, is also a deterrent. There is no question for the publishing house to receive a possible subsidy for this scientific work. Fayard assures him: all profits from the sales will go to the Auschwitz-Birkenau Foundation. Even the launch of the book also took place, on May 19, in the greatest poverty. No great decorum to announce the release of the book but the austerity of the Frédéric-Joliot room, at the CNRS headquarters in Paris, to better underline the scientific nature of the project.

Some remarks on the announcements of @EditionsFayard as for the new edition of #MeinKampf
1) Good news, in honor of the publisher: the book will not be in the office, but will have to be ordered by booksellers. Which diminishes the “bestseller” effect which was to be feared.


In this highly sensitive context, why publish such a rant? The stakes are twofold, according to historian Hélène Miard-Delacroix. The interest is primarily scientific. “At a time when fewer and fewer people speak German, it is interesting to offer researchers, professors, students or simply curious about history a reliable translation to rely on.”

The last translation published by Nouvelles Éditions latines, which still markets the pamphlet under the title “My fight”, dates back to 1934. This previous version of 700 pages intentionally racist did not mention the real style of the author. “The translator focused on improving Hitler’s literary qualities, which had none,” the professor says. In 1938, a new edition cut off from the anti-French passages was published under the title “Ma doctrine”, already published by Fayard. The last version of 2021 proposed by the renowned Germanist Olivier Mannoni, who has worked on authors such as Sigmund Freud, Stefan Zweig or Franz Kafka, this time offers a text more faithful to the original and therefore rougher with a poor vocabulary and many repetitions.

Each of the twenty-seven chapters of the critical work is, moreover, preceded by a long introductory contextualization, written by a committee of a dozen historians. The original text is also surrounded by 2,800 notes. The critical apparatus of the work therefore makes it possible “to guide the reader by providing him with all the data necessary to better understand the text by spotting the lies and omissions of the author. It is in particular an opportunity to recall that Hitler was not the war hero he claims to have been. “

The second interest is civic. This scientific work is “a real mission in the service of history”, assures Hélène Miard-Delacroix. To date, anyone can obtain the 1934 version from the Nouvelles Éditions latines in a few clicks on the internet. This publishing house, regularly referred to as the far-right, sold nearly 5,000 copies last year alone. Reason enough, according to Éditions Fayard, not to put such a flammable book in everyone’s hands without critical warnings.

Especially since the pamphleteer fell into the public domain in 2016, some 70 years after the death of Adolf Hitler. While France has had a judgment since 1980 which requires any reissue to have an eight-page foreword, these provisions seem very slim given the hateful reactions that such a text can arouse. “Before a publishing house in its turn embarked on such a project without guarantee, it was urgent that a text with an excellent critical apparatus occupy the ground to bypass any risky undertakings”, continues the ‘university.

France is not alone in offering a new edition of “Mein Kampf”. In January 2021, Editions Bellona, ​​in Warsaw, also published a critical edition, in Polish, of 1000 pages. A critical edition in German of nearly 2,000 pages, published in two volumes, was published by a historical research center in Munich, the IfZ, in January 2016.

The French version could also have been released earlier as in Germany. For several years, the project had been advanced and even completed. But the release dates have been pushed back several times because of criticism leveled over whether to reiterate this call to hatred.

In 2015, Jean-Luc Mélenchon was particularly indignant that we indulge in such a provocation. “We edit Mein Kampf to sell paper […] It is not something desirable or even morally acceptable, “said the politician on the i-Télé set on October 28, 2015.” In our country, wearing Nazi insignia is prohibited. Why publish “Mein Kampf”? “

In 2019, several Jewish associations also stepped up to the plate on behalf of the victims of the Shoah. Embarrassed, Fayard had therefore postponed the publication of the book. Some historians, like Johann Chapoutot, are campaigning for a critical reissue of the book in a digital version so that the book does not appear at the top of the gondola. An argument quickly swept aside by Fayard editions, which recall that the book cannot be put on the shelves.

So the day after a demonstration dominated ideologically by the far-right, the question of the day is the reissue of Mein Kampf.
What a nightmare!
And I imagine that there too we will find people “on the left” to explain that this is normal and that tvb. Let’s turn the page, quickly!


Within days of its publication, others are outraged that the book is coming out as the Israeli-Palestinian conflict is rekindled. But the defenders refuse to postpone the project once again. “This is work that began ten years ago and cannot be postponed successively in the light of recent events,” retorts Hélène Miard-Delacroix. “Whether Jean-Luc Mélenchon and the other detractors like it or not,” Mein Kampf “is part of our reality. We must obviously be indignant about this work but we must above all fight it. The critical apparatus and the notes are the best weapons to deconstruct Nazi ideology. ”

"The return of Laurent Gbagbo could not be discreet"

what to remember from the 2nd day of Roland-Garros

“Victor” Kouchner filed a complaint against his stepfather Olivier Duhamel