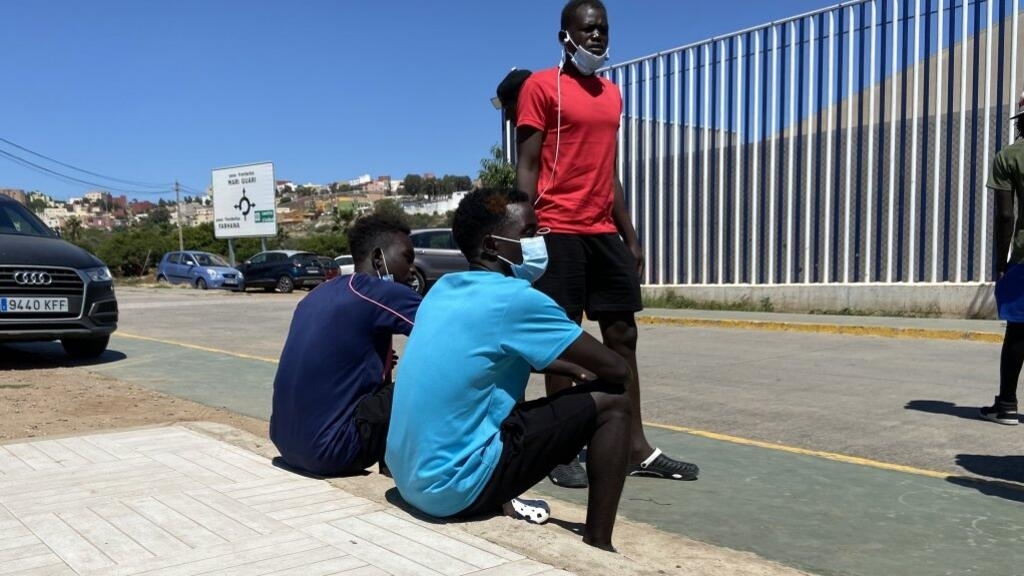 Since the arrival of 8,000 migrants in the enclave of Ceuta two days ago, residents of Melilla, the other Spanish territory on Moroccan soil, fear a similar event. The military are widely deployed in the city. About a hundred migrants have arrived in the past 48 hours, half of them have been sent directly back to neighboring Morocco. Reportage.

It is midnight this Tuesday evening on Hipica beach in Melilla. The air is stifling as is the atmosphere. At the end of the Melilla dike, which serves as a border with neighboring Morocco, around 40 migrants have been intercepted by the Spanish authorities. They had just crossed into Spanish territory by sea. The police took them out of the water. For several hours, kept at a distance, journalists and migrant aid collectives gathered on the beach, did not know what exactly was going on. Only the numerous blue rotating beacons flashing in the night, and the sound of the helicopter circling in the sky above the beach, indicated a large-scale operation.

Two hours later, all those arrested that evening were returned directly to neighboring Morocco.

Yesterday evening around midnight, migrants who tried to pass to #Melilla from neighboring Morocco (Beni Ansar) were intercepted by Spanish forces and directly expelled a few hours later. pic.twitter.com/ELwezB0xFz

Since the arrival the day before 8,000 migrants in the other Spanish enclave, 400 km away, in Ceuta, the authorities of Melilla have stepped up the surveillance of their borders. A similar event is out of the question here. Pedro Sanchez, the Spanish Prime Minister, on a trip to Melilla, has promised: he will “protect the borders” of the country and “restore order”. A security message to appease a rather worried population.

>> To (re) read: Almost 6,000 migrant arrivals in one day in Ceuta: the reasons for such an influx

“I voted for him and now I regret it,” said Tomas *, a young man in his 20s who greeted the prime minister with insults on Tuesday. “I don’t want immigration to get out of hand. I want more border security.” Same fear on the part of her friend who does not want “Melilla to become a giant center for migrants”.

Disproportionate reactions according to the aid collectives to the migrants present in the enclave. “The situation is far from catastrophic,” said Javier, member of Servicio Jesuita a Migrantes, a collective helping undocumented migrants. In 2020, around 1,300 people arrived in Melilla, up from 5,000 in 2019.

Here, few migrants are homeless. There are also no informal settlements. “People sleep in abandoned buildings, on the beach, but it is far from being the majority”, details Javier. Asylum seekers waiting to reach the mainland are accommodated at CETI, the only reception center in the small enclave. Unaccompanied minors are referred to structures specially designed for them.

On Tuesday, 86 Sudanese managed to enter Melilla, they were all taken care of by the authorities. None have slept outside. They were transferred to a special center to respect a mandatory quarantine, then they will join the CETI.

According to the authorities of #Melilla, 40 migrants from sub-Saharan Africa tried to enter the Spanish enclave last night. – From what we could see, the migrants did enter Melilla before being returned to Morocco. pic.twitter.com/OjuZ3bCQeG

“The closing of the borders complicates the situation”

In addition, arrivals – although almost daily – are rarely massive, say the collectives. “There are often around 30 people trying to cross over,” but rarely more than 100, explains Marta, a member of CEAR, another migrant aid association.

“The migrants find themselves stranded here. But the situation is not out of control. It’s complicated because the borders are closed due to the Covid pandemic.” As of March 2020, asylum seekers from Melilla have indeed been “stranded” in the enclave. Impossible to transfer them to the Spanish mainland.

>> To (re) read: Spain singled out for welcoming migrants in Melilla

For Marta, the “migratory wave” is therefore a fantasy. Since the start of the year, the young woman estimates that there have been around 800 arrivals. “This is an important figure, obviously, but not alarmist. At CETI, there are currently 1,000 people, this is more than the maximum capacity of 700 people, but it is quite low compared to previous years. had up to 1,700 migrants in 2019 at CETI “.

“The government of Melilla has asked for a deployment of more soldiers here, along the borders, just that or. I do not think it is necessary,” she said.

decisions on restrictions within 8-10 days, the economy suffers

a vaccination schedule is emerging in Europe and the United States