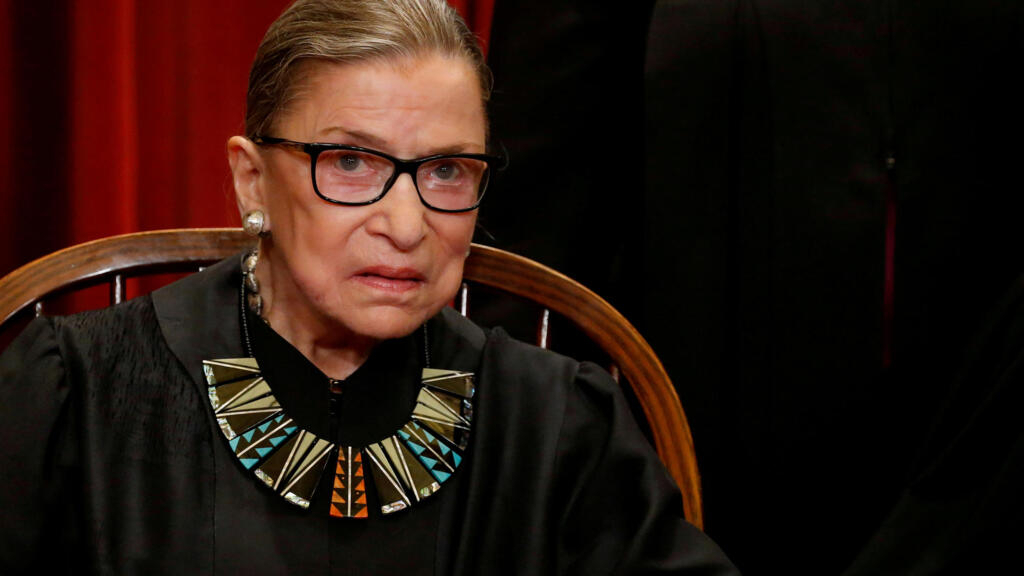 Ruth Bader Ginsburg, dean of the US Supreme Court, passed away on Friday at the age of 87. This progressive judge, feminist icon, made history by fighting for gender equality. She’s leaving an empty seat in an institution that Republican President Donald Trump has promised to fill with conservative judges.

“Notorious RBG” is no more. Judge Ruth Bader Ginsburg died of pancreatic cancer at the age of 87, the United States Supreme Court announced on Friday (September 18). The dean of this institution had made repeated stays in the hospital lately. Her health was closely scrutinized by the progressive camp in the United States, which considers her an icon of the feminist struggle, champion of the cause of women, of minorities and of the environment.

His death gives Republican President Donald Trump the opportunity to nominate a conservative successor. He is preparing to do so in the coming days, according to US media. In early September, he drew up a list of potential candidates, most of them opposed to abortion and in favor of carrying weapons. Republican Senators Ted Cruz, Josh Hawley, and Tom Cotton are among them.

It will then be up to the Senate to confirm the choice of the president. Donald Trump will be able to rely on a Republican majority in the Upper House, although the position of a handful of moderate elected officials is not yet clear on whether to confirm a judge so close to the November 3 presidential election.

If successful, the Supreme Court would be made up of six conservative judges versus three progressive judges. The stakes are high: this institution has the last word on all subjects that divide Americans, such as abortion, minority rights, the carrying of weapons or the death penalty.

The next few weeks could therefore give rise to a furious political battle. According to public radio NPR, Ruth Bader Ginsburg had expressed the wish, a few days before her death, not to be “replaced before a new president is invested”.

BREAKING NEWS from @NPR : Ruth Bader Ginsburg died Friday at age 87 from complications of cancer.
In a statement dictated to her granddaughter Clara Spera days before her death, she said, “My most fervent wish is that I will not be replaced until a new President is installed.”

In February 2016, the death of conservative judge Antonin Scalia had given rise to a battle of the same kind. At the time, Senate boss Mitch McConnell called on Democratic President Barack Obama not to name a successor and wait for the presidential election. He had won his case.

On Friday night, Senate Democrats boss Chuck Schumer tweeted the same statement, word for word, as Mitch McConnell at the time: “The American people should have a say in choosing the next court judge. Supreme. So this seat should not be filled until we have a new president. “

The American people should have a voice in the selection of their next Supreme Court Justice. Therefore, this vacancy should not be filled until we have a new president.

A vote will take place

Mitch McConnell, however, confirmed on Friday evening that a vote would be held in the Senate once President Trump has made his choice.

The Senate and the nation mourn the passing of Justice Ruth Bader Ginsburg and the conclusion of her extraordinary American life.

All eyes are therefore on a handful of moderate Republican senators. Just before news of ‘RBG’ death was announced, Republican Alaska Senator Lisa Murkowski told local media she would refuse to vote for confirmation from a Supreme Court judge so close to the polls presidential.

Donald Trump held a rally in Minnesota on Friday evening. He learned the news after it, telling reporters Ruth Bader Ginsburg had “led a wonderful life” and “was a wonderful woman whether we agree with her or not.” He made no comment on what happened next.

“RBG”, appointed to the Supreme Court in 1993 by President Bill Clinton, had achieved superstar status over the past ten years, especially among young progressive Americans who had a cult following for him. To the point of earning the nickname “Notorious RBG” in reference to the rapper Notorious BIG.

On the night of Friday to Saturday, hundreds of people gathered outside the Supreme Court in Washington to pay their respects. His journey commands the admiration of many Americans. Coming from a Jewish family in Brooklyn, she began her studies at Cornell University where she met her future husband, Martin Ginsburg. She then goes through Harvard and Columbia universities, where she ends up tied for her class.

Yet she struggles to find work immediately: “I had three things against me. One, I was Jewish. Two, I was a woman. But the most serious thing was that I was the mother of a four-year-old, ”she said.

This is how Ruth Bader Ginsburg became a feminist activist. Between 1972 and 1978, she won five victories in six cases of discrimination based on sex argued before the Supreme Court. She was welcomed into this institution 15 years later and became the second woman to sit there, along with Sandra Day O’Connor.

Since then, it has distinguished itself by its progressive positions. “There will be enough women on the Supreme Court when they are nine” (the maximum number of judges, editor’s note), she used to answer reporters.

It also illustrated its independence. “I say” (“I do not agree”), she wrote without adding “respectfully” when, during the disputed presidential election of 2000, the majority of judges had ruled in favor of George Bush. Words that resonate particularly strongly at 46 days of an election which could also be contested.

Mozilla permanently closes Firefox Send, because it was used to spread malware

Disappearance of historian Marc Ferro, a great specialist in Russia and cinema