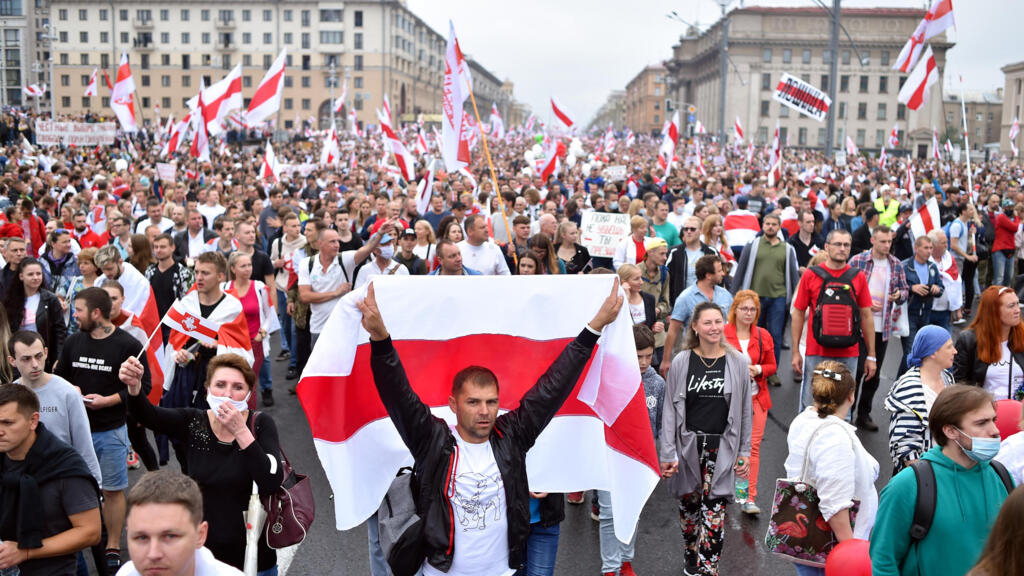 Tens of thousands of Belarusians demonstrate in Minsk on Sunday to denounce the re-election of President Alexander Lukashenko and the repression of the opposition.

Tens of thousands of Belarusians demonstrated in Minsk on Sunday to denounce the re-election of the president Alexander Lukashenko, faced for two weeks with a huge protest movement, according to AFP journalists.

Waving white and red flags, the colors of protest, the crowd gathered on Independence Square and the surrounding streets, singing slogans like “Freedom!”

Opposition-linked media and Telegram email accounts reported more than 100,000 protesters in the Belarusian capital for the second Sunday in a row. Gatherings in several other cities across the country were also reported.

The demonstrators denounce the re-election of Alexander Lukashenko on August 9, deemed fraudulent, as well as the brutal repression that followed.

“If he really won the election (with 80% of the vote) so why are so many people going out into the streets against him? “, pretends to question Evgueni, an 18-year-old protester.

Alexander Lukashenko “wants everyone to disperse and live as before (the ballot). But it will never be the same again,” insists Nikita, 28, for his part.

The army threatens to intervene

The Defense Ministry warned that in the event of unrest near World War II memorials and protest sites over the past two weeks, officials would have to do “not with the police, but with the army.”

The Belarusian president has so far remained upright in his boots and has been able to count on the loyalty of the army, police and secret services, even though he has recorded defections in state media and public enterprises .

Last week in Minsk, some 100,000 people gathered to demand the departure of Alexander Lukashenko, who, in 26 years in power, has never been faced with such a challenge, in number and in duration.

The Belarusian president, who rules his country with an iron fist, has ruled out leaving office, as requested by his main competitor in the August 9 ballot, Svetlana Tikhanovskaya. Shortly after the election, the latter was exiled in Lithuania, under threat according to his relatives.

For Moscow, the situation is stabilizing

Russia believes that constitutional reform in Belarus would be a lasting solution to the political crisis, Foreign Minister Sergey Lavrov said on Sunday as quoted by Russian news agencies. According to the head of diplomacy, the situation is stabilizing in the country.

Sergey Lavrov, who accuses opponents in exile of trying to provoke “a bloodbath”, considers that it is impossible to prove that Alexander Lukachenko did not win the presidential election.

PSG at the gates of his dream against Bayern Munich

Basketball Arm Sleeves: Why You Should Wear Them

In Jerusalem, fear and uncertainty reign on the Esplanade des Mosques

Juliette Gréco, icon of French song, died at the age of 93