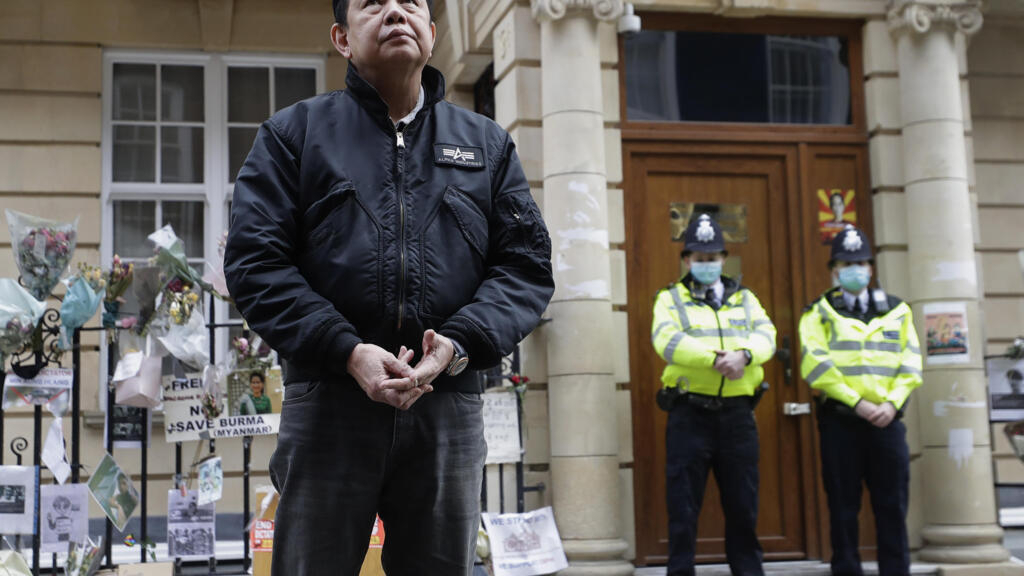 The Foreign Office announced Thursday that it had been notified by the Burmese authorities of the end of the mandate of Ambassador Kyaw Zwar Minn, support of Aung San Suu Kyi dislodged the day before from his embassy by diplomats close to the junta. London has said it has no choice but to accept the decision of the Burmese government.

The British Foreign Office said Thursday (April 8) that it had been formally notified by the Burmese authorities of the end of the mandate of the Burmese ambassador to the United Kingdom, ousted from his representation by relatives of the junta.

The UK must therefore accept the decision of the Burmese government regarding Kyaw Zwar Minn, whose replacement name has not been announced, the ministry said, stressing that the UK’s long-standing position has been to recognize states. , not governments.

After waiting in vain in front of the representation door, he spent the night in his car, the rear window of which displayed a large photo of the head of the civilian government, overthrown by a military coup on 1er February.

In a statement read from him outside the building by Min Hein, a member of the Burmese community in London, he said that his deputy ambassador’s team, Chit Win, “threatens embassy staff with severe sanctions if these staff members do not continue to work for the military junta “.

In a message posted on Twitter, British Foreign Minister Dominic Raab condemned “the intimidating actions of the Burma military regime in London yesterday”.

We condemn the bullying actions of the Myanmar military regime in London yesterday, and I pay tribute to Kyaw Zwar Minn for his courage. The UK continues to call for an end to the coup and the appalling violence, and a swift restoration of democracy


Hailing the Burmese ambassador for “his courage”, he reiterated his call for an end to the “appalling violence” in Burma and “a rapid restoration of democracy” in the country.

The Burmese ambassador on Wednesday accused a military figure close to the junta of “occupying” his embassy, ​​denouncing “a kind of coup”.

Asked who were inside the building while he was stationed outside, Ambassador Kyaw Zwar Minn told AFP: “The military attaché. They are occupying my embassy.”

Meanwhile, in Burma, violence continues. At least eleven people were killed and several injured Wednesday and Thursday by security forces in Taze, in the center of the country, local media reported. The latter also report three deaths in the ranks of the army, a report that AFP could not confirm at this stage from an independent source.

Residents, armed with hunting rifles and incendiary bombs, tried to prevent police and soldiers from entering the town. The latter then retaliated.

About 600 civilians have been shot dead since the coup d’état of 1er February, according to the Association for Assistance to Political Prisoners (AAPP).

>> To read also: “Burma: ‘The opposition to this coup d’etat is almost visceral'”

The toll could be heavier: more than 2,800 people have been arrested. Many, without access to relatives or to a lawyer, are missing.

And the judicial hunt continues. Some 120 celebrities in the country – singers, models, journalists – are targeted by an arrest warrant, accused of having disseminated information likely to provoke mutinies in the armed forces.

Among them, Paing Takhon, model, actor and singer very famous in Burma and in neighboring Thailand.

The 24-year-old was arrested Thursday at his mother’s home in Yangon “by about fifty police and soldiers and taken into custody,” his older sister Thi Thi Lwin said on Facebook.

Shoes left in the streets

The repression “is now concentrated in rural areas”, notes the AAPP. In the cities, the protesters are trying to find parades to continue to be heard.

On Thursday, they left shoes in the streets to symbolize each absent protester.

In Yangon, they have also been installed in bus shelters, some decorated with red roses in tribute to “heroes who fell under the bullets”, according to images posted on social networks.