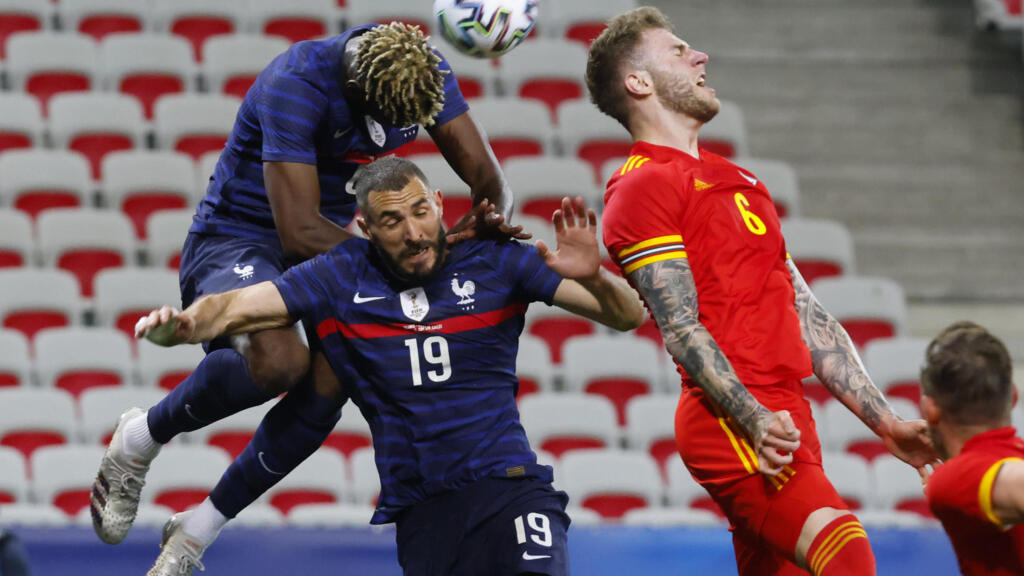 For this first preparation match before the European Championship, the French team defeated Wales 3 goals to 0 on Wednesday. Karim Benzema made his comeback with the Blues on this occasion.

The Blues of the returning Karim Benzema, restless but unhappy with a missed penalty and an outgoing post, overpowered the Welsh (3-0) quickly reduced to ten, Wednesday, June 2 in a friendly in Nice, two weeks from the shock against Germany at the start of the Euro.

After a week of work at Clairefontaine, the France team has hinted at promises for this first preparatory match before the European Championship (June 11-July 11) against Gareth Bale’s Wales.

Didier Deschamps had taken out the heavy artillery at the Allianz Riviera with a starting XI very close to the one which should start against Germany on June 15 in Munich, N’Golo Kanté in less. The Chelsea midfielder, fresh European champion with Chelsea, watched his replacement Corentin Tolisso from the hotel play his scales.

The spotlight on Benzema

The spotlight was of course on Benzema, back in the blue jersey five years and seven months after his 81st and last appearance, also in front of the Allianz Riviera, one evening in October 2015 in a friendly against Armenia (4-0 ).

If the Real Madrid center-forward did not repeat the performance produced at that time, with a double and an assist in the key, he spent with accuracy and application, failing to score his 28th international goal. after just four minutes on an uncrossed header receiving a cross from Paul Pogba.

There was a lot of talk about the “golden triangle” formed with Antoine Griezmann and Kylian Mbappé before the meeting but the association with the “Pickaxe”, a week after his lost Europa League final with Manchester United, proved fruitful. Very in leg, Pogba has multiplied the centers for the head of Benzema, always available and generous in the area.

The first goal is the fruit of their joint efforts. Upon receiving a cross from Griezmann, Pogba slammed a header that Welsh goalkeeper Danny Ward pushed back. In ambush, Benzema brought the ball to his thigh before shooting on goal. On his way, defender Neco Williams made a hand, caused a penalty and collected a red card.

“Do better next time”

Griezmann took the ball in hand and offered it to Benzema. But the 33-year-old striker missed his duel against Ward (27th), the replacement keeper of Leicester who dived on the right side.

Despite his efforts, Benzema did not improve his personal statistics, unlike the two other attacking stars Mbappé (34th, 1-0), scorer on the lookout after a long shot from Adrien Rabiot, and Griezmann (48th, 2-0) on a shot wound in the skylight after a subtle deflection from Mbappé.

However, it was on a strike from the Real striker, pushed back by a post, that the incoming Ousmane Dembélé closed the scoring (79th, 3-0). The Welsh goalkeeper pushed back his head (83rd) at the end of the game.

“The main thing is to create opportunities, to win and do better next time to score a few more goals,” Benzema commented on TF1. “He was unhappy, but he was very present with his technical ease. A goal that would have pleased him and me too, but if he keeps them for later …”, smiled Deschamps.

With this easily drawn success, the coach was able to unfold his initial plan without a hitch: blow Pogba and Tolisso, replaced after an hour of play, and spare his side Benjamin Pavard and Lucas Hernandez from the break.

Baptism of fire on the right side for Koundé

The rotation benefited in particular the rookie Jules Koundé, credited at 22 with a promising first selection among the world champions. For his baptism of fire on the right side, the Sevilla FC defender did not hide, for example delivering a center for the other entering Lucas Digne (62nd) and signing a decisive double intervention (65th).

On this action, goalkeeper Hugo Lloris was also distinguished by a firm intervention with one hand, symbol of his extreme vigilance during the rare Welsh incursions near his cage.

In his hometown, the former Aiglon did the job (5th, 30th) so that his 100th cape as captain of the Blues, absolute record, is not marred. He was also able to count on an impeccable part of his central defender Presnel Kimpembe, incisive and powerful.

The Blues will be able to turn calmly to the reception of Bulgaria, Tuesday in Saint-Denis, last rehearsal before the clash against Germany, hung 1-1 Wednesday night by Denmark.

In France, emergency numbers disrupted by an outage at Orange

“There is a moment when the performing arts can die”, warns Jean-Michel Ribes