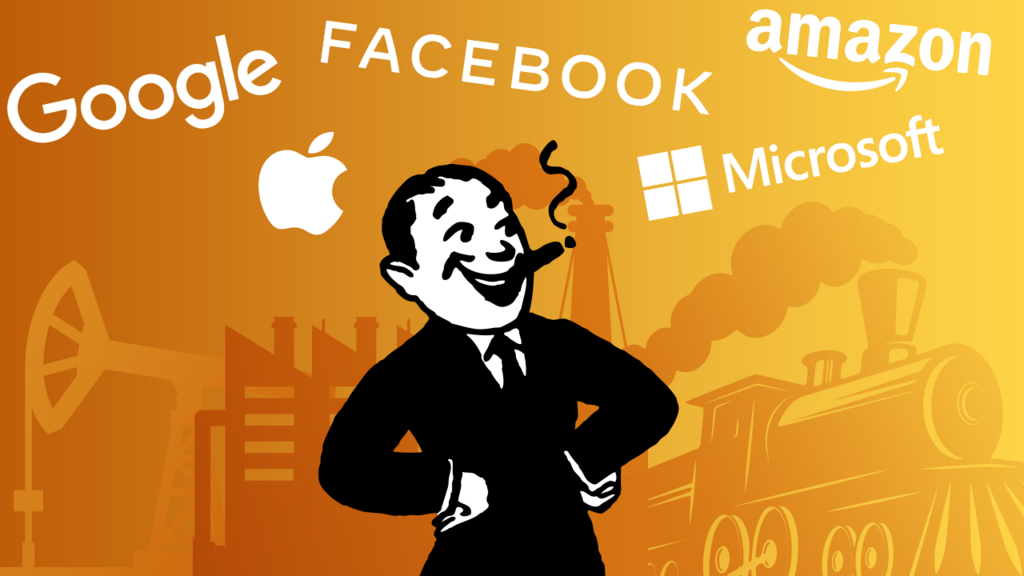 A US parliamentary report on Tuesday compared the power of the Gafa to that of the big American monopolies at the end of the 19th century. A relevant parallel in more than one way, according to historians interviewed by France 24.

Isn’t the digital age so far removed from that of industrialization? The Gafa (Google, Amazon, Facebook, Apple) would be the modern equivalents of the rail barons and oil tycoons of the late 19th and early 20th centuries, according to one relation to vitriol, Eagerly awaited, US parliamentarians on the place occupied by the tech giants in the economy, published Tuesday, October 6.

After sixteen months of investigation and countless hearings, elected representatives of the House of Representatives felt that the time had come to move up a gear to limit the power of these masters of the Net. The Republicans may not follow the Democrats on the subject of the measures to be taken – dismantling the Gafa, limiting the possibilities of acquiring competitors or even facilitating legal actions against them – they share the same observation: the quasi-monopolies of these behemoths are reminiscent of those of the days of the Standard Oil Company, the Rockefellers and other Vanderbilds (railroad).

This parallel certainly does not take into account the historical context. At the dawn of the last century, the United States industrialized at high speed and wages were climbing while today, the country is rather marked by a certain deindustrialization with stagnant wages. But, notwithstanding these differences, this reminder of the past is “much more than historically relevant, since the Gafa are the modern versions of these companies of the past power 1000, in terms of capitalization or market share”, assures Romain Huret, specialist. of American history and vice-director of the School of Higher Studies in Social Sciences (EHESS), contacted by France 24.

But the similarities are not limited to economic weight, argues historian of American capitalism Noam Maggor. They are much deeper, starting with the way in which these economic empires were built by vampirizing public action. “The rail and oil giants have benefited from the planning of the territory by the government and public subsidies to grow, just as the Gafa have built their fortunes on the back of research and development carried out by the State”, recalls this researcher. at Queen’s Mary University in London, contacted by France 24. Google Maps and operating systems for smartphones in general would be nothing, for example, without the development of GPS by the US military.

Apple, Amazon and the others also have a strike force capable of influencing entire sections of the economy, similar to that of the great “trusts” of the past. “At the time, the decision of a railway company to pass through a town or not could seal the economic fate of the community”, recalls Noam Maggor. The savage battle fought in 2017 and 2018 by dozens of American cities to have the privilege of hosting Amazon’s second headquarters also demonstrates the influence of these behemoths on the local economy.

The giants of the past and the present also share the same vision “very unfavorable to workers’ rights with a non-respect, for example, of working hours”, notes Romain Huret. Joining a union is at best discouraged by the Gafa and at worst sanctioned. For example, Amazon had posted a job advertisement for a analyst capable of detecting “union threats“Some kind of version 2.0 of the scabs of yesteryear?

Not just an economic question

The similarities are found until in the answers of Gafa the conclusions of the House of Representatives report. All said the proposed measures – such as rollback – would act as a brake on innovation and “would not be beneficial to the consumer”. “This is the same rhetoric used by the tycoons of the time, who claimed that attacking them was to stand in the way of ‘progress’ and was against the interests of consumers,” says Noam. Maggor.

“Nobody denies the positive economic impact of these companies. The report is less interested in the question of their economic role than that of the social function of these groups”, specifies Romain Huret. And this is the whole point of the approach of elected officials for Noam Maggor: it breaks with “the idea, which has prevailed for thirty years in the United States, that it is only necessary to punish behavior from which the consumer suffers”, notes the American historian.

This doctrine has allowed the Gafa to slip through the cracks by offering, like Facebook or Google, free services or by affirming, like Apple and Amazon, that their platform has given birth to a rich ecosystem where the consumer has a choice.

But the parliamentary report “adopts an older approach to the fight against abuses of a dominant position, which is more political and consists in ensuring that these giants do not escape all control”, underlines Noam Maggor.

This is why he thinks that this report is important, because it reminds us that the users of these internet platforms “are not only consumers but also citizens who perhaps do not want a handful of large groups. control “all information concerning them. This is the “same approach adopted” by elected officials who attacked the monopolies of the trusts of yesteryear, recalls this specialist in American capitalism.

The French historian Romain Huret also finds that the work of American parliamentarians is going in the right direction… in theory. Because the practical recommendations made by the report leave him more dubious. They are ambitious on paper, but, like the idea of ​​dismantling these groups to make them less powerful, they “seem impractical,” he said.

Above all, he notes the absence of any recommendation as to the imposition of these groups “when this would be the most effective means of combating their influence”. An “oversight” which does not surprise him: “We must realize that the rise of the Internet giants owes a lot to the accommodating policies of the Democrats, and that the Silicon Valley groups are among the main donors of the candidates of this party “, underlines the French historian. In other words, this report is a bit like the snake biting its tail, according to him: it draws up the “correct” observation that the abuse of a dominant position is not just an economic issue. and must also be assessed with regard to the political and social influence of these groups… but be careful not to advocate the most effective remedies for fear of losing a source of political funding.

Soul, the next Pixar film, will be released direct and for free on Disney +

Why craft beer is sweeping the nation

the social democrats create a surprise in the legislative elections

Back on the pitch, Joe Biden to meet Jacob Blake’s family in Kenosha

videos of Russian military convoys near the border spread panic