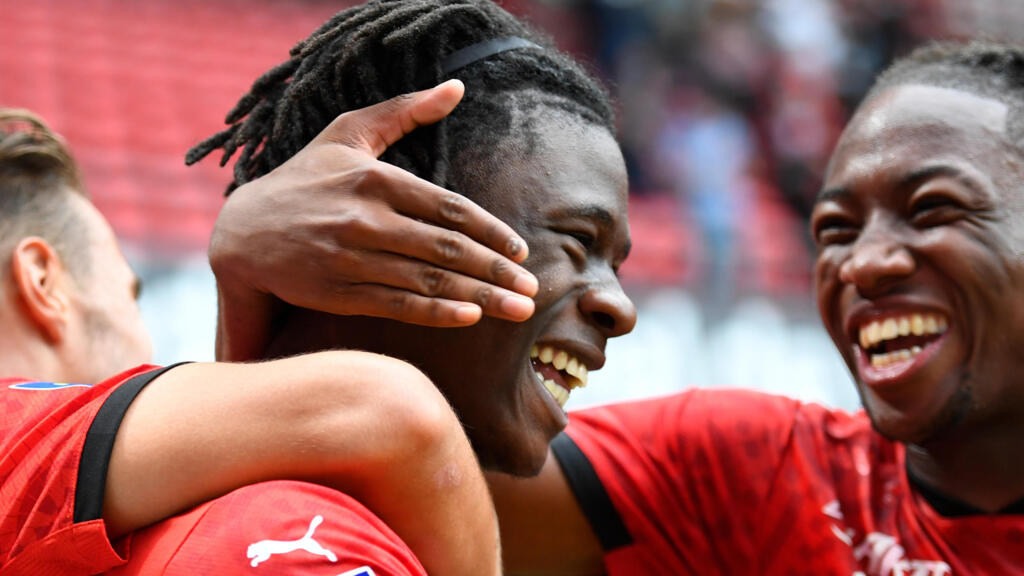 At only 17 years old, Eduardo Camavinga is the sensation of the French championship. After making an impression last season, the Rennais made a comeback with a bang. Author of a magnificent goal on Saturday against Montpellier, the footballer from Angola also obtained his first call for the French team this week.

Eduardo Camavinga will remember his week for a long time. Thursday, August 27, 2 p.m., the young midfielder from Stade Rennais learn that he is called for the first time in the France A team. Two days later, on Saturday August 29, at Roazhon Park in Rennes, he celebrated this invitation to Clairefontaine in the most beautiful way. At the 77e minute against Montpellier, he splashes his class the meeting. A one-two with Faitout Maouassa, an acceleration, a body feint and an unstoppable cross shot, he scored his second professional goal and gave his team victory in the process.

At only 17 years old, he impresses with his precocity. Last season, he had already entered the legend of his club by becoming the youngest goalscorer in the history of Stade Rennais. In September, he could also become the first minor player to have a selection in Blue since the Second World War, if he comes into play against Sweden or Croatia.

Tatami mats at the football stadium

Everything is going very quickly for this footballer from Angola. Eduardo Camavinga only obtained French nationality last November. As recalled the Infomigrants website, it was in 2003 that he arrived in France, at the age of two, “with his five brothers and sisters and his parents, who fled the former Portuguese colony for a better life”. The family first settled in the North, before moving to Brittany, in Fougères, about forty kilometers from Rennes.

The little boy is not particularly attracted to the round ball, but rather to judo. “My brother did it and at first I wanted to do like him. Except that at one point I was at school and I played soccer all the time. The supervisors told my mother to register. This is how it started, “he confided last November during an interview with the French Football Federation after being called up to the French Espoirs team the day after his 17th birthday.

At 7, he discovered in his first club. His talent is obvious. “He quickly played with kids older than himself, and he was always outclassed, which seemed natural for a prodigy like him. He took the steps one after the other, always sober and full. of humility, “his former trainer Nicolas Martinais told Infomigrants.

The young footballer also shows great courage in the face of life’s difficulties. In 2013, the Camavinga lost their house in a fire. All their savings go up in smoke. The Fougeres club offers a quest in their support, but Eduardo’s father refuses, as described to Le Point magazine Jo Burel, educator at the AGL Drapeau-Fougères: “He had told his son that he knew he would straighten the whole family by becoming a great player!”. A few months later, the prophecy comes true. Eduardo joined the Stade Rennais training center, before signing his first professional contract in December 2018. He had his first tenure in May 2019 and did not leave the starting 11 until the end of the season.

A fine torchbearer, versatile, fast, last May he joined the top 50 of the best young people at the world level of the specialized site Football Talent Scout, where it ranks second. This nugget attracts the attention of the biggest European clubs. According to Spanish media, Real Madrid would be ready to take out their checkbook to bring it to Spain.

But on the side of Rennes, the leaders are not yet ready to part with it. “If Real Madrid offers him 80 million euros as we talk about it, the answer is no. We want him to stay so that he continues to develop in Rennes,” said sporting director Florian Maurice in July. last on RMC Sport. “For me it is clear that this player has to be part of the project for the coming season. We want to continue with him.” Discreet, the player rarely speaks to the media, but he also does not fail to express his attachment to the Breton team. “Rennes is my city. It’s my club,” he explained in a video for the FFF. “The club gave me everything humanely and for school too”.

Having become indispensable at Stade Rennais, Eduardo Camavinga will now try to make a place for himself in the French team, a dream he touches with his finger: “From a very young age, when I was watching in K7 the French team 98 world champion , I was hoping to wear this jersey one day “. Even if he now benefits from Paul Pogba’s package, for coach Didier Deschamps, he already has all the keys in hand to become a very great. “It may happen early, but sooner or later, it would have come. Pogba’s package meant that there were players missing in the middle,” said the French technician at a press conference. “In terms of personality, it shows when he’s on the pitch. He has an influence despite his young age. He is able to do things at his age. You have to be vigilant, but he has a potential that means that sooner or later he will be an integral part of this team.

How tennis players can reach their full potential

How to watch certain Netflix movies and series for free?

The secrets to becoming an unstoppable basketball player

Countdown to the many benefits of tennis for children