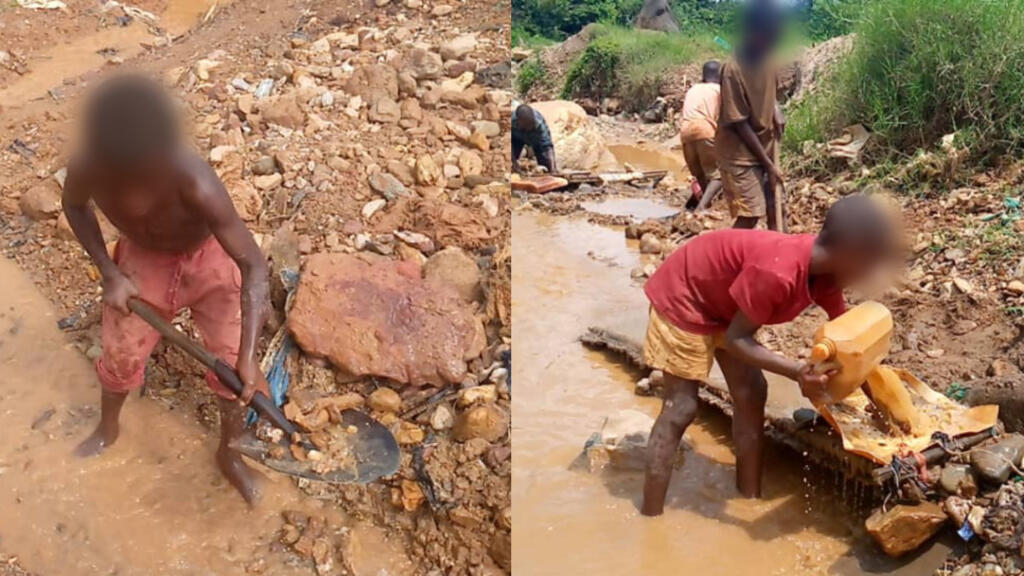 Videos and images sent to the editorial staff of Observers de France 24 on March 3 show children working in the gold mines of Kamituga, in the province of South Kivu, in the east of the Democratic Republic of the Congo. Although prohibited, child labor in the country has been a reality denounced for several years by human rights NGOs.

Basins and shovels in hand, children, some as young as 10, scramble to clean the mud freshly dug from the wells to extract gold without equipment and protection. In mid-February, Idi Kyalondwana, who works in a stone-crushing mining cooperative, moved to the mines of Kamituga, in the province of South Kivu, where gold is mined by artisanal people. He came out with several images and videos to denounce child labor in these farms.

“Some go down to the deep wells of several hundred meters”

Working in the mines is the daily life of many children here. They work several hours a day. Some even descend into pits several hundred meters deep and tunnels to dig and find gold without any safety measures. It’s very dangerous. There are often landslides.

Others are exposed to toxic products like mercury which they use to wash the ore. They also have to carry heavy loads. These children are mostly of school age and are not attending school. Yet the head of state, Félix Tshisekedi, declared free primary education.

Unemployment rate is high in South Kivu[noreliableofficialstatisticsexist[aucunestatistiqueofficiellefiablen’existe[noreliableofficialstatisticsexist[aucunestatistiqueofficiellefiablen’existeAccording to a local radio station, it would be 80%, Editor’s note]. Parents cannot afford to take care of their children. The latter are therefore forced to go to work in the mines to earn money by reselling grams of gold to traders.

Yet child labor is prohibited by law. But local authorities and the mine police are doing nothing to discourage this phenomenon.

South Kivu is full of several gold deposits largely exploited by the Kivu mining company (SOMINKI) and the Canadian company Banro Corporation through four subsidiaries including Kamituga Mining, which holds the city’s main mining concession. But the activities of Banro Corporation in the province have been suspended since September 2019 in due to security threats linked to the presence of rebel militias.

“Poverty remains the main cause of this phenomenon”

However, according to Raoul Kitungano, director of the NGO “Justice for all” which fights against child labor in the mines of South Kivu, the local populations continue to exploit part of the mining field conceded to the multinational.

People were already mining the gold mine before the arrival of Banro Corporation. But to keep the peace, Canadian society agreed to allow local diggers to continue to have access to the deposit.

People here are drawn to the easy and quick cash. So they gave up farming to work in the mines. The dropout rate is also high [aucune statistique ne permet de le confirmer, NDLR]. Although the state has declared free primary education, the program is not yet effective throughout the country.

Young people take reckless risks because it was in this same mine, in September 2020, that a well collapsed killed more than fifty people. But we do not have credible statistics on the number of children who would be affected by the phenomenon. No study has yet been done on the subject in South Kivu.

At the NGO level, we have limited resources. We educate parents and children to dissuade them from going to work in the mines. But more needs to be done. Jobs must be created and alternative projects set up to get young people out of the wells.

When contacted, Banro Corporation did not respond to our questions. We will publish their response if it reaches us.

In an interview published in March by the Congolese magazine specialized in Mining & Business, Venant Burume, Minister of Mines of South Kivu, conceded that “in territories like Shabunda, Mwenga, more than 80% of people work in the artisanal mining sector. In Kalehe too, with the lack of employment there, most of our young people fall back on artisanal mining. “

In 2016, a report by Amnesty International and the Congolese NGO Afrewatch estimated at 40,000 the number of children working in inhumane conditions only in artisanal cobalt mines in the south of the Democratic Republic of the Congo.

Under pressure, the government declared, in a strategic document, published in October 2017, its desire “to eradicate child labor in mining activities by 2025”.

By relying on the law on the protection of the child which condemns the worst forms of child labor, the mining code revised in 2018 in its article 299 bis, thus represses “the exploitation and the trade of mining products coming from ‘a site where laws on the protection of human rights, children’s rights or women’s rights “are violated. The penalty is $ 10,000 per day until the violation ceases. But according to Raoul Kitungano, “these texts are not being respected. And there has been no real progress”.

However, according to the director of the NGO “Justice for All”, “thanks to the activism of NGOs at the international level, there are now fewer children in cobalt ores, which is a strategic mineral, very invaluable in the design of smartphones and lithium-ion batteries, and of which the DR Congo is the world’s largest producer. But child labor is still a scourge in the exploitation of other minerals. “

In 2019 therefore, the International Rights Advocates, an association for the defense of human rights, filed a complaint against the tech giants, Apple, Microsoft, Google, Dell and Tesla, accusing them of knowingly benefitting from child labor in cobalt mines in DR Congo.

the Covid-19 vaccination campaign will start on Monday

the executive is considering “adapting” the confinement in early December