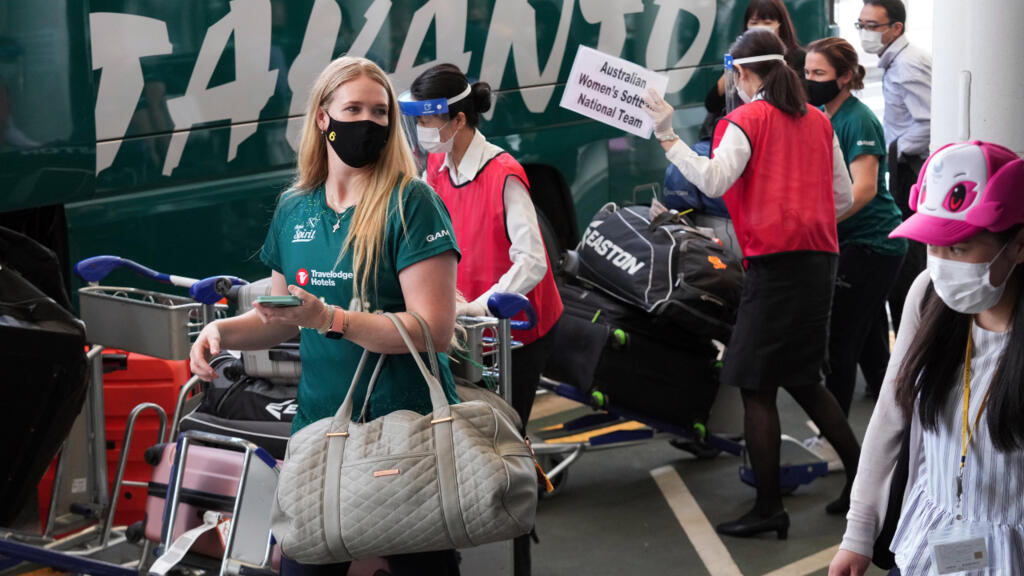 The Australian softball team arrived in Japan on Tuesday. Seven weeks before the start of the trials, while the staging of the event continues to be controversial, only 2.5% of the country’s population has received two doses of the Covid vaccine.

The first Olympic team has arrived on Japanese soil. The players of the Australian softball team touched down in Japan on Tuesday (June 1) for the Tokyo Games which are still controversial and doubts in the midst of a pandemic.

Upon their arrival at a terminal at Narita airport, near the Japanese capital, the Australian sportswomen, all smiles, waved to the press before undergoing a blood test. Covid-19 and complete administrative formalities.

About three hours later, a Japanese official confirmed that all 21 players and members of their delegation had all tested negative.

Great to see the Aussie Spirit arriving at Narita this morning. Many thanks to the team’s host town @OtaCity_PR, the 🇯🇵 Gov, TOCOG for all the support and hard work. We wish a safe & successful training camp for # Tokyo2020, while observing the COVID measures.@SoftballOz pic.twitter.com/K4Y356HFMN


The Australian team in green and gold uniform then left to take up residence in the city of Ota, located about a hundred kilometers northwest of Tokyo, in the department of Gunma.

Like all participants in the Olympics (23 July-8 August), Australian players are subject to a strict health protocol, having been vaccinated and also tested before their departure.

They will be joined by two other players based in Japan. The team will train on site and play matches against local teams to refine its preparation before the Olympics.

Prevent the risk of infection

“We know that we will undergo a bunch of anti-Covid tests” but “we are prepared for that”, said before the departure Jade Wall, one of the players of the “Aussie Spirits”. “We want to take all possible precautions to ensure our safety and that of others when we arrive and throughout our stay,” she added.

Australia’s Softball squad will be the first international team to arrive ahead of the Olympic Games.
They will spend the next two and a half months in a biosecurity bubble, and compete in stadiums without any fans. @DamoNews # 9News pic.twitter.com/JIJMoIT4wi


A final selection of 15 players for the competition is to be announced in early July. The team will then return to the Olympic Village on July 17 and play the inaugural match against Japan on the 21, two days before the opening ceremony of the Olympics.

Several dozen localities which were to host foreign teams across Japan have canceled their projects due to the health situation. But Ota’s mayor, Masayoshi Shimizu, told reporters on Monday that his town was proud to “offer its support to show (its) friendship” and maintain its long-standing ties with Australia.

Plans to meet with local schools have been canceled, although the city still hopes to organize events via the internet. To prevent the risk of infection, the Australian team’s living space will be confined to a single floor of a hotel, where the players will use the gym, eat and relax.

The players “will only leave the hotel to go to and from the training ground,” Australian softball boss David Pryles told AFP. “They will have less contact with the public than they would have had in Australia.”

But the game is worth the candle: softball has not made an appearance at the Olympic Games since 2008 and will be absent in Paris in 2024. Tokyo will therefore be for many players the only opportunity to run for the Olympic metal, while the Australia has been a softball medalist in each of her appearances.

The arrival of sportsmen in Japan “will help us realize that the Games are approaching,” Japanese government spokesman Katsunobu Kato said, expressing hopes that Australian softball players “will prepare well for Ota and show their best performances. “.

Japanese athletes and staff members participating in the Olympics were also to start being vaccinated on Tuesday, well before the rest of the country. The vaccination campaign was indeed well behind schedule in Japan, where only about 2.5% of the population received two doses of the Pfizer / BioNTech vaccine. In addition, 10 of the 47 departments of Japan remain subject to a state of health emergency.

Government and organizers of the Games assure that they will take place and be held in a “safe” manner. The International Olympic Committee recently assured that more than 80% of residents of the Olympic Village will be vaccinated.

The Japanese population is however overwhelmingly opposed to the organization of the Games, wishing, according to various polls, their cancellation or a new postponement, a hypothesis that the organizers have firmly rejected.

Reissue of "Mein Kampf" on June 2, “a historical and citizen mission”