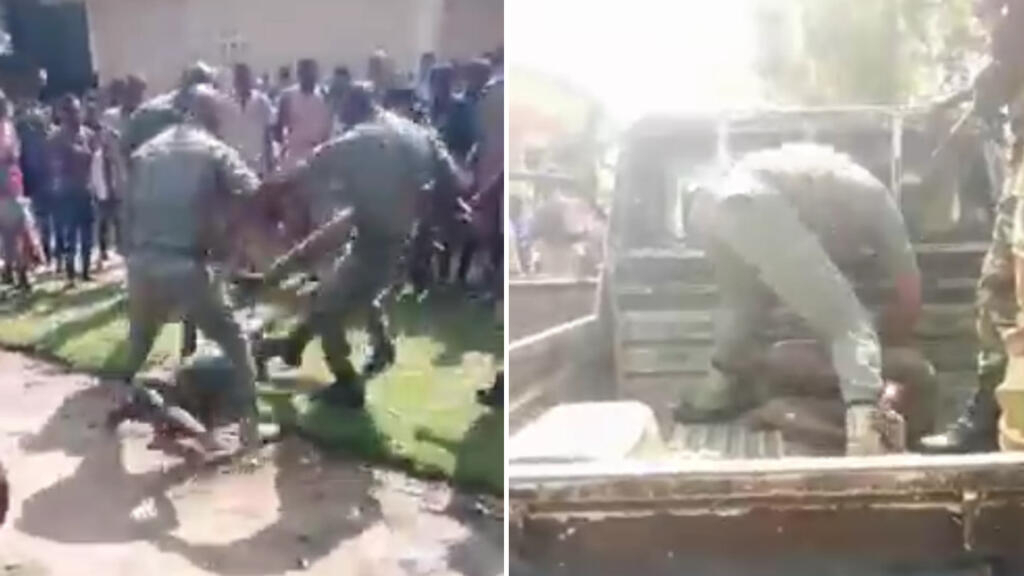 A video posted on Facebook on April 16 shows two young men being brutally beaten by men in military uniform in the courtyard of a high school in the town of Gamboma. While several publications wrongly claimed that it was a high school student, arousing the indignation of Internet users, several sources on the spot confirmed that they were in fact two “black babies”, a term which designates the gangs of violent adolescents, who had just been arrested by the military.

The video has been shared almost 300 times on Facebook. We see four soldiers molesting a man on the ground by kicking him violently in the stomach and back in front of an audience of high school students in school uniform. Seconds later, a second naked person was beaten by other soldiers in the back of a pickup. The agent punches the young man a few times before taking him by the testicles.

As this video is particularly shocking, we are only showing screenshots of it.

The legend accompanying the video claims it is a high school student “lynched in Gamboma” [République du Congo]. But according to other publications, it is more like “army officers in uniform beating so-called kuluna”, another term used to refer to “black babies”. What is it really?

The scene took place on Wednesday April 14 in the courtyard of Henry Lopes high school in Gamboma, a town located nearly 300 km from Brazzaville, in the center of the country. Contacted by the editorial staff of the Observers of France 24, a high school teacher who was there recounts. He requested anonymity.

The people who are in the images are not students of our establishment, contrary to what is said on social networks. These are two people presented as “black babies” who were arrested by soldiers in the morning, a few meters from the school.

Elements of the army had previously come to secure a lady’s restaurant into which a “kuluna” had entered. We do not know for what reason. Panicking, the owner called her husband, who is a member of the military.

The latter then moved with several of his colleagues. Once in the neighborhood, they arrested these two “kulunas” who were trying to escape on a motorcycle. The school became the venue for this show because it was in the schoolyard that the army vehicles were parked.

While the soldiers were taking them on board, the high school students had time to film the beating.

The dissemination of the video on social networks outraged several Internet users. “Is it normal what they do these soldiers? And it happens in a school. It is not at all normal. They are the real kuluna”, comments a user. “What is the difference between these soldiers and these kulunas?” Asks another.

The “black babies” are gangs of teenagers and young people ranging in age from 12 to 30 years old. This phenomenon of juvenile crime, which is very present in Brazzaville, the Congolese capital, is also spreading to towns in the interior of the country. Accused of theft, assault and also murder, “black babies” are often treated as pariahs by the populations.

>> To read on Les Observateurs: In Congo Brazzaville, the gangs of “black babies” wage a neighborhood war with machetes

“Whatever the fault or the crime committed, people must be treated with dignity”

But according to Alain Oyandzi, a member of the Congolese Human Rights Observatory, contacted by the France 24 Observers editorial staff, there is no justification for such violence on the part of the security forces.

We all followed this video which outraged us. When you see a citizen being beaten in this way by those who are supposed to protect them, it can only arouse outrage and contempt.

The Congolese Human Rights Observatory has regularly organized seminars for the security forces to help them understand that the human person is sacred. Whatever the fault or the crime committed, people should be treated with dignity.

Those in charge of the army must bring their men to their senses and to common sense, because these behaviors tarnish the image of our army.

The editorial staff of the Observers of France 24, tried to join the Congolese army, without success. We will publish their response if it reaches us.

Covid-19 in Seine-Saint-Denis: in Aubervilliers, meeting with a family struck by the virus (3/3)

the departure of astronaut Thomas Pesquet to the ISS

new mobilization against the abandonment of a treaty protecting women

Hubert Auriol, former director of the Dakar rally and first presenter of Koh-Lanta, is dead

thousands of angry protesters on the second anniversary of the uprising