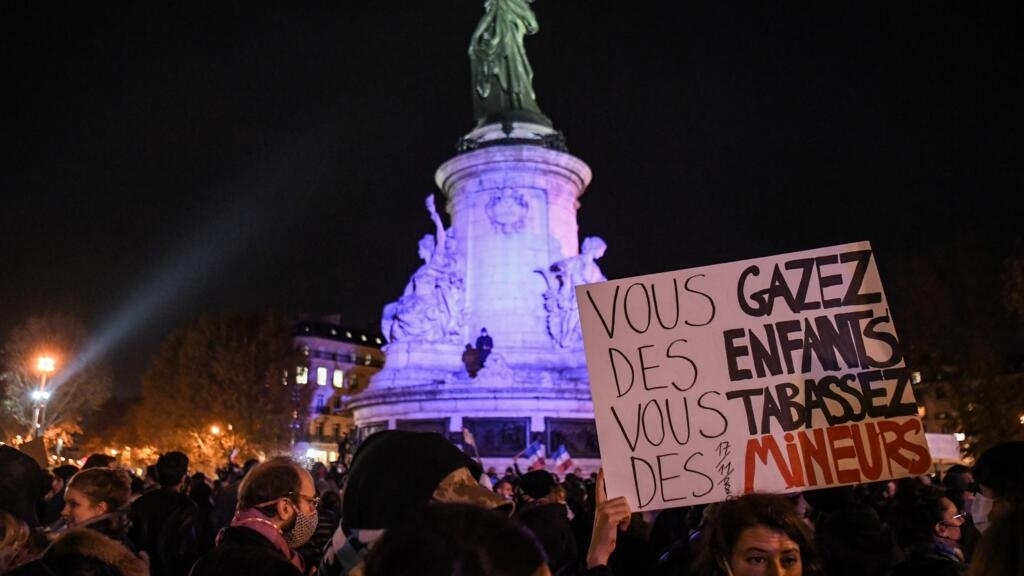 Two investigations for “violence” targeting police officers who participated, Monday evening, in the dismantling of the migrant camp Place de la République, were opened by the Paris prosecutor’s office.

The Paris prosecutor’s office announced Tuesday, November 24, to have opened two investigations relating to acts of “violence”, of which the police are suspected of a migrant and a journalist, during the evacuation of a migrant camp in the capital.

The General Inspectorate of the National Police (IGPN) was tasked with investigating these facts, revealed in videos posted on social networks, which occurred Monday evening, on the sidelines of the operation carried out by the police on the Place de la République.

>> To read: A new migrant camp violently dismantled in Paris

The first investigation concerns events that have occurred in the Beaubourg district in Paris: a man dressed in white, surrounded by a group of police officers, manages to flee before falling heavily, victim of a uniformed police officer having stretched his leg over his passage. He gets up quickly to run again.

The second investigation concerns facts visible in a video posted on Twitter by journalist Nicolas Mayart (Le Média), which shows a policeman now on the ground Rémy Buisine, flagship journalist of the online media “Brut”, brandishing his baton.

According to the journalist from Brut, who commented on these images on Twitter, this is the “third time” that the “same policeman” attacked him in “the evening”. Brut assured Tuesday on Twitter that his journalist had been “molested several times”. “It totally got out of hand,” said Rémy Buisine on Tuesday morning on Europe 1.

Several hundred migrants, wandering since the evacuation of a large exile camp last week, set up a new camp in central Paris on Monday, which the police forcefully dismantled in the evening, using tear gas. Very quickly, images of violence were relayed on social networks. Migrants came out of their tents by force and with batons.

The defender of rights Claire Hédon announced to AFP that she was seizing these facts. Several associations, including Médecins du monde and Secours Catholique, have expressed their intention to seize this body.

As part of his mission to ensure respect for the fundamental rights of foreigners and the ethics of the security forces, the Defender of Rights examines the conditions for the evacuation of exiles last night, Monday, November 23, at Place de la République.

According to the Paris prosecutor’s office, two police custody for acts of violence and contempt of a person holding public authority, during this evacuation, were the subject of a dismissal with a reminder of the law.

Demonstration in peace in Paris

In the aftermath of this police intervention and after a day when indignation was on everyone’s lips, or almost, several hundred people gathered to protest Tuesday evening in the calm, Place de la République, in Paris.

Among the demonstrators who came, at the call of associations of aid to migrants, to ask for shelter for the evacuees on Monday evening, Traoré Yoro, member of the coordination of undocumented migrants of 75, said he wanted to “support the exiles, who suffered police violence “. “It had started last week already but this time everyone saw,” he added to AFP.

“It was abject, this violence”, explains Adèle, 21 years old. “And that comes with a whole context, the law on global security. We can see that if it had not been for the images, we would not have known anything.”

Article 24 of this bill, adopted Tuesday by the National Assembly, penalizes one year in prison and a fine of 45,000 euros for the dissemination of “the image of the face or any other identification element” of members of the security forces in intervention, when it “undermines” their “physical or mental integrity”.

Isaline, a 21-year-old student, nevertheless hopes that the evacuation of the place, Monday evening, will be “the beginning of an awareness”.

For Adèle, an activist at the Refugee Camps Observatory, it is a question of “denouncing the hypocrisy of the government, which says it is carrying out shelter operations and leaves a thousand people behind. “.

Since the evacuation a week ago from a camp in Saint-Denis, between 500 and 1,000 people were wandering the streets on the outskirts of Paris, according to the associations that come to their aid.

“Since yesterday, that has not changed, we are simply asking for the shelter of people on the street in the midst of a pandemic and an end to the police harassment suffered by the exiles”, insists Maël de Marcellus, Parisian manager of Utopia56, and one of the organizers of the rally.