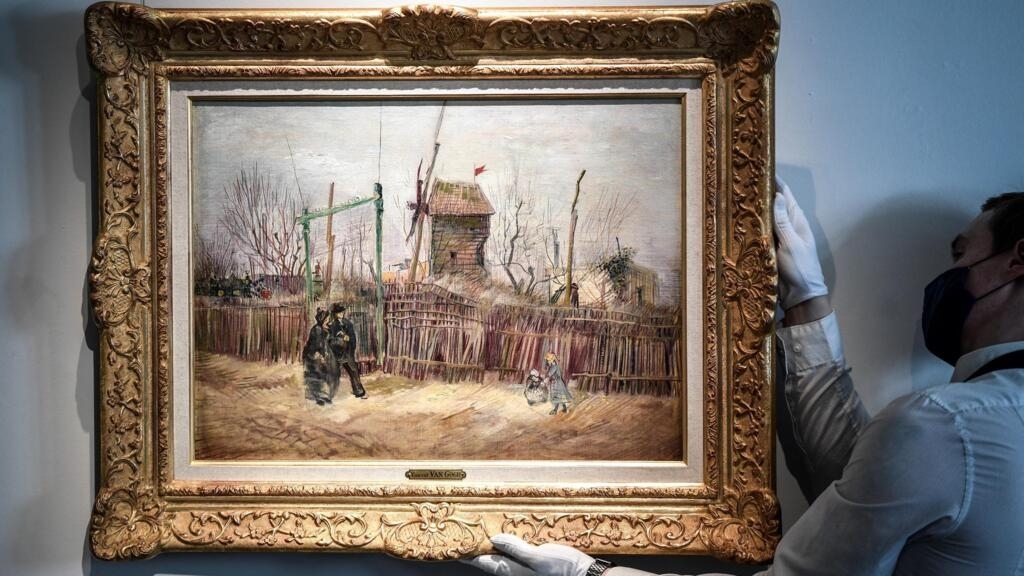 A painting by Vincent Van Gogh was sold on Thursday for more than 13 million euros. Purchased by a French family in 1920, this “Street scene in Montmartre”, never exhibited, was one of the few paintings by the Dutch master still in the possession of private persons.

Vincent Van Gogh always popular. “Street scene in Montmartre”, a Van Gogh never exhibited before, was awarded 13 million euros Thursday in Paris, well above its estimate, a record in France for the Dutch painter.

Dated 1887, painted during the two short years that Vincent van Gogh spent in Paris, the canvas was listed in catalogs (by black and white photos), but had never appeared since its acquisition by a French family around 1920 .

It was acquired for an amount of 13,091,250 euros (costs included), a record for the artist in France, welcomed Sotheby’s who organized this sale by video.

In 2017, “Plowman in a Field” (1889), painted by Van Gogh in the year before his death, in his Provencal period, the most colorful and also the most popular, had reached $ 81 million at Christie’s in New York .

Sotheby’s and the Mirabaud-Mercier auction house, which had discovered “Street scene in Montmartre”, showed the public in February this masterpiece belonging to the very rare series of paintings representing the mythical Moulin de la Galette.

The work had been kept for a century by the same French family, whose identity has not been disclosed.

“The sale of this magnificent painting carried by an electric atmosphere is one of those magical moments that we are given to live in an auction house”, underlined in a press release Aurélie Vandevoorde, auctioneer of the sale, Etienne Hellman , director of the Impressionist and modern art department and Pierre Mothes, vice-president of Sotheby’s France.

The canvas represents the Pepper Mill, one of the Galette mills, behind palisades, against a background of a blue-gray winter sky. In the foreground, a couple are walking and two children are playing.

In the itinerary of the Dutch painter (1853-1890), this painting marks a turning point, an expressionist beginning with a use of color aimed at creating an impression beyond the transcription of reality.

“It is a testimony to Montmartre at the end of the 19th century”, underlined Aurélie Vandevoorde. Parisians would go for a walk and have fun in the Moulin de la Galette park, but Van Gogh was more sensitive to the bucolic side than to the representation of cabarets “.

This auction is part of a double sale of impressionist and modern works at Sotheby’s in Paris and London.

A pastel “Dancer” by Edgar Degas, a rare Francis Picabia, “The Matador in the arena”, and a work by Camille Pissarro, “La Récolte des Pois” commissioned by Theo Van Gogh and recently returned to the collector’s heirs Jew Simon Bauer, were also offered for sale in Paris.

In London, there is a portrait by Picasso dating from 1941 of the photographer Dora Maar. The painting is estimated at between 6.5 and 8.5 million pounds (7.6 to 9.9 million euros), as is a triptych in spring tones by Briton David Hockney, one of the most expensive living artists in the world. . Also for sale, two paintings by the Norwegian Edvard Munch, the painter of the “Scream”: a rare self-portrait from 1926 and a beach scene “Embrace on the beach”.

one of the two reformist candidates withdraws