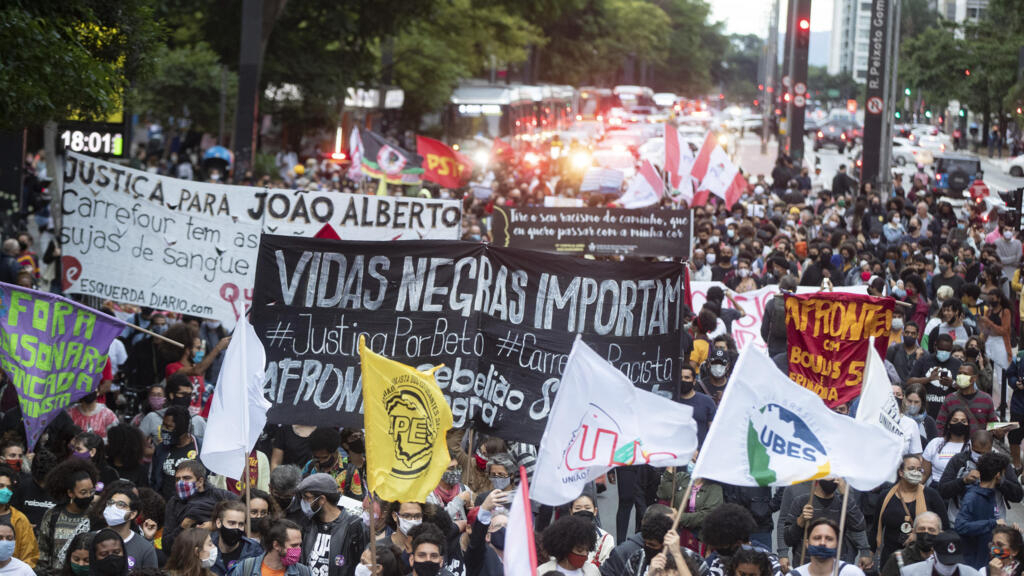 The death, Thursday evening, of a black man beaten by white security agents in a supermarket of the Carrefour group in Porto Alegre, triggered a wave of indignation in Brazil, in the middle of Black Conscience Day celebrated Friday in the country .

A wave of indignation swept over Brazil after a black man was beaten by white security guards in a supermarket of the Carrefour group in Porto Alegre, in the south of the country. The drama took place in the middle of Black Consciousness Day celebrated in Brazil on Friday.

A thousand demonstrators marched through downtown Sao Paulo to a group store in the Jardim Paulista neighborhood. Some of them threw stones against the glass facade and invaded the establishment, destroying or setting fire to goods, windows and other facilities, according to an AFP photographer. “The hands of Carrefour are stained with black blood”, one could read on one of the banners brandished by demonstrators.

The death of a black man beaten by white security agents in a Carrefour group supermarket in Porto Alegre has sparked outrage in Brazil, in the midst of Black Conscience Day celebrated in the country on Friday. #AFP pic.twitter.com/3Ae0afEosP

In Porto Alegre, where the victim succumbed to violence by security agents, police dispersed a demonstration with tear gas and stun grenades, according to local television. “Carrefour, it can close, it killed our brother, it cannot continue!”, Chanted dozens of young people carrying banners and masks with the slogan “Black Lives Matter”.

The incident that outraged the country took place on Thursday evening: a video recorded by a witness, circulated by the media and on social networks, shows the moment when Joao Alberto Silveira Freitas, 40, is punched multiple times in the face by one of the agents while the other held it.

>> To read: The memory of black personalities censored in Brazil, under the leadership of Jair Bolsonaro

On other images we see the emergency services performing a cardiac massage to the man lying in front of a supermarket entrance and who died on the spot. According to military police, Mr. Freitas threatened a supermarket worker who called security guards.

The two attackers were arrested. One of them is a military policeman who works for the private security company outside of his working hours.

A friend of the victim who witnessed the beating told news portal G1 that, while being beaten, Silveira Freitas “cried out that he could not breathe,” a phrase that evokes the death of George Floyd, an African-American man suffocated to death by police in May in Minneapolis, United States, a murder that shocked the world and sparked mass mobilisations across the country.

The Brazilian subsidiary of the Carrefour group regretted the “brutal death” of Mr. Freitas and said it would take “the appropriate measures to hold accountable those involved in this criminal case”.

In a series of tweets in Portuguese, the French boss of Carrefour, Alexandre Bompard, expressed his condolences after this “horrible act” and considered that the images posted on social networks were “unbearable”.

“Internal measures were immediately taken by the Carrefour Brazil Group, mainly concerning the contracted security company. These measures are insufficient. My values ​​and the values ​​of Carrefour do not align with racism and violence”, a he wrote.

Mr. Bompard also called for “a complete review of training actions for employees and subcontractors, in terms of safety, respect for diversity and the values ​​of respect and rejection of intolerance”.

“Looks like there is no way out. Even on the day of black consciousness,” lamented Richarlison, Métis striker of the Seleçao who plays in Everton, in the England football championship.

“They beat to death a black man in front of the cameras. Violence and hatred have lost all modesty,” he added, singing the names of Brazilians Joao Pedro, 14, and Evaldo Santos, a musician of 51 years, as well as that of George Floyd, referring to other black men who died as a result of police violence.

On the other hand, the Brazilian vice-president, Hamilton Mourao, assured that it was not a racist act, while describing as “regrettable” the murder perpetrated, according to him, by “an unprepared security agent to activity “. “For me, in Brazil, there is no racism. It is something they want to import here in Brazil. It does not exist here,” said the retired general.

For its part, President Jair Bolsonaro, without mentioning the death of Silveira Freitas, claimed on Twitter that the country’s problems “go beyond racial issues” and that the “great evil” of Brazil continues to be “moral, social and political corruption”.

“As president, I am color blind: they are all the same color. There is no better skin color than the others. There are good men and bad men”, proclaimed the president of ‘far right.

In Brazil, the last country in the Americas to abolish slavery, in 1888, more than half of the 212 million inhabitants are black or mixed race.

According to the “Atlas of Violence” published last August, the number of murders of blacks increased by 11.5% between 2008 and 2018, while among non-blacks it decreased by 12.9%.